Abby (Ashley Bratcher) is a junior at Texas A&M University in 2001 when she attends a volunteer fair. She signs up to help women in crisis at Planned Parenthood in Bryan, Texas, because she knows what women go through. When Abby was a freshman, she was seeing Mark (Alexander Kane) and became pregnant. He suggested she get an abortion, though she was conflicted because she was raised a Christian. Nevertheless, she went through with it. About a year later, she marries Mark, but it’s a mistake. When she discovers she is pregnant during divorce proceedings, she has another abortion. She tells herself that getting rid of the pregnancy is better for everyone, which is how she validates her volunteer work at Planned Parenthood. She wants to keep abortions safe and rare.

Meanwhile, on Saturdays, when all the abortions for the week are scheduled, Abby and two members of the Coalition for Life, Shawn (Jared Lotz) and Marilisa (Emma Elle Roberts), strike up a friendship. Marilisa and Abby bond over fashion, while Shawn’s calm demeanor and kindness appeal to her.

After six years of volunteering, Cheryl (Robia Scott), the director of the Planned Parenthood facility, gets a promotion and hires Abby to be the new director. Abby marries Doug (Brooks Ryan), and she becomes pregnant. Abby does so well as the director that she receives the Employee of the Year Award. She attends an in-service day where Cheryl, now at the main office in Houston, tells employees that they must raise their abortion quotas and, thus, increase profits. Abby questions Cheryl about profits when Planned Parenthood is a nonprofit organization. Abby is reprimanded by management for asking probing questions about Planned Parenthood in front of employees.

In 2009, Abby is asked to assist in an ultrasound-guided abortion due to a staff shortage. In all her years at Planned Parenthood, she has avoided seeing a single abortion procedure, even if she was in the room. On that day, she watches the ultrasound procedure and sees a 13-week-old fetus struggle for life as it dies and is suctioned out. After presiding over 22,000 abortions and seeing one up close, it changes her life forever.

The first several minutes of Unplanned are very difficult to watch because we see, through a graphic CGI flashback, what Abby sees. Her journey through denial, to uncovering lies, to the realization of what really happens in an abortion, is presented with emotional power that builds throughout the narrative. When Planned Parenthood seeks to obtain a gag order for Abby when she quits, she hires a contingency lawyer (Kaiser Johnson), whose spot-on performance saves the film from despair and lifts it through unexpected laughter. Bratcher’s performance is quite good, but Scott’s Cheryl comes off as a stereotypical “bad guy. ”

This deeply moving film is based on Abby’s best-selling book Unplanned: The Dramatic True Story of a Planned Parenthood Leader’s Eye-Opening Journey across the Life Line.

In the year 2563, Dr. Dyson Ido (Christoph Waltz) hunts through junkyards for discarded cyborg pieces to restore them or create new ones from the pieces. There has been a terrible war; an uneasy peace prevails between humans and cyborgs, good and bad. Ido finds a cyborg torso of a young female and is surprised that her human brain still functions. He surgically and mechanically mends her and names her Alita (Rosa Salazar), after his little girl who died.

Alita has no memory of her identity or her past. Ido gives her a curfew because there is danger after dark in an already dark world. A mysterious “city ” named Zalem hovers above that holds some kind of power over the earth and its creatures.

Alita: Battle Angel is a 3-D science-fiction drama based on Yukito Kishiro’s series of graphic novels published in the 1990s. It’s very difficult to say what the film is actually about. I wish the characters had been more developed—they are difficult to relate to or care about. James Cameron (Avatar) coproduced and cowrote the script, and Robert Rodriguez (Spy Kids) directs. 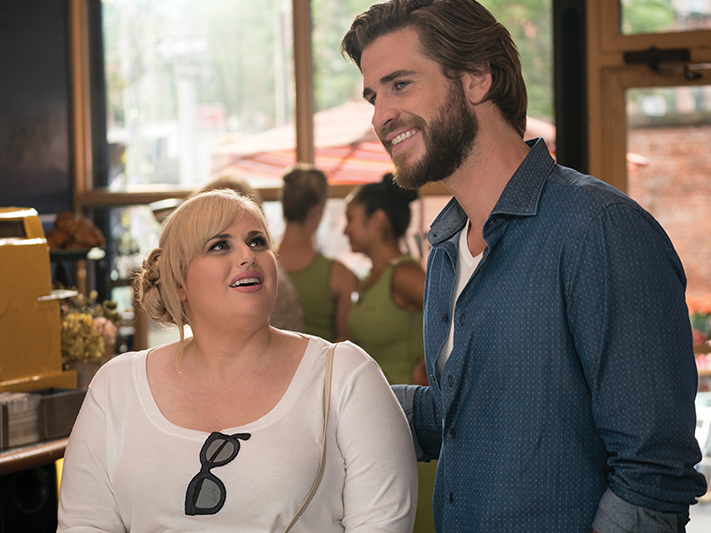 Natalie (Rebel Wilson) is an architect who works in New York City. She lacks self-confidence and mocks the clich és of romantic comedies (rom-coms). Whitney (Betty Gilpin) is her assistant and best friend, who watches rom-coms on her computer all day at the office. Josh (Adam Devine) is sweet on Natalie. While he looks at her longingly, Natalie assumes he’s looking out the window at an ad of a sexy model.

Blake (Liam Hemsworth) is a client who thinks she is the coffee girl. When Natalie is mugged in the subway, she wakes up in a PG-13 rom-com of her own with all these characters in new roles. Her salty language is bleeped out (except in one instance), which elicits some of the best laughs in this otherwise predictable parody. Still, there is a solid message for audiences in this otherwise mediocre film: Natalie comes to realize that in order to love another person, she must first love herself.