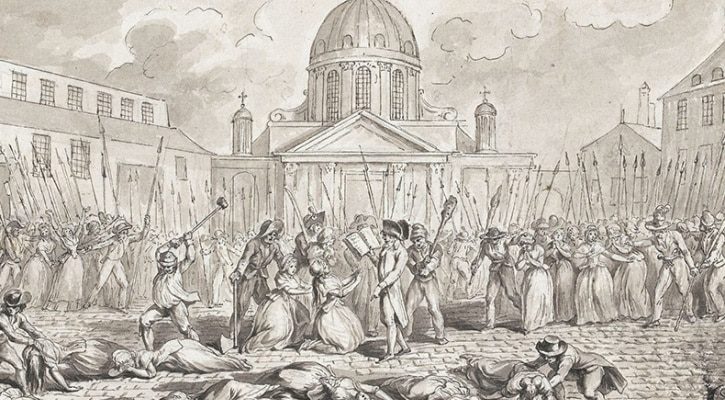 Saints of the Day for September 2

These priests were victims of the French Revolution. Though their martyrdom spans a period of several years, they stand together in the Church’s memory because they all gave their lives for the same principle. In 1791, the Civil Constitution of the Clergy required all priests to take an oath which amounted to a denial of the faith. Each of these men refused and was executed.

John Francis Burté became a Franciscan at 16 and after ordination taught theology to the young friars. Later he was guardian of the large Conventual friary in Paris until he was arrested and held in the convent of the Carmelites.

Appolinaris of Posat was born in 1739 in Switzerland. He joined the Capuchins and acquired a reputation as an excellent preacher, confessor, and instructor of clerics. Preparing for his assignment to the East as a missionary, he was in Paris studying Oriental languages when the French Revolution began. Refusing the oath, he was swiftly arrested and detained in the Carmelite convent.

Severin Girault, a member of the Third Order Regular, was a chaplain for a group of sisters in Paris. Imprisoned with the others, he was the first to die in the slaughter at the convent.

These three plus 182 others—including several bishops and many religious and diocesan priests—were massacred at the Carmelite house in Paris on September 2, 1792. They were beatified in 1926.

Born in 1737, John Baptist Triquerie became a Conventual Franciscan. He was the chaplain and confessor of Poor Clare monasteries in three cities before he was arrested for refusing to take the oath. He and 13 diocesan priests were martyred in Laval on January 21, 1794. He was beatified in 1955.

“Liberty, Equality, Fraternity” was the motto of the French Revolution. If individuals have “inalienable rights,” as the Declaration of Independence states, these must come not from the agreement of society—which can be very fragile—but directly from God. Do we believe that? Do we act on it?