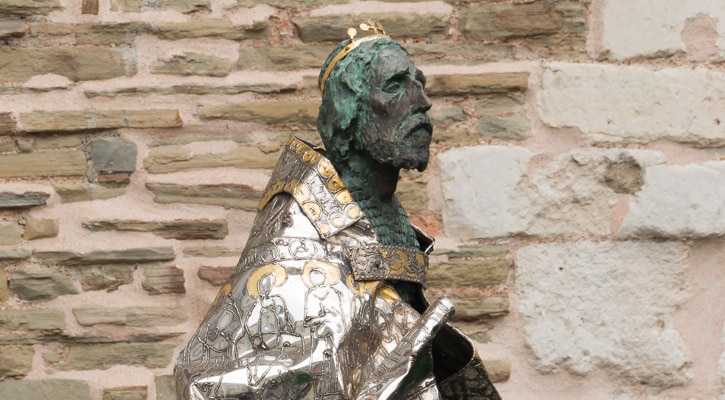 Saint of the Day for August 16

The Church is universal, but its expression is always affected—for good or ill—by local culture. There are no “generic” Christians; there are Mexican Christians, Polish Christians, Filipino Christians. This fact is evident in the life of Stephen, national hero and spiritual patron of Hungary.

Born a pagan, he was baptized around the age of 10, together with his father, chief of the Magyars, a group who migrated to the Danube area in the ninth century. At 20, he married Gisela, sister to the future emperor, Saint Henry. When he succeeded his father, Stephen adopted a policy of Christianization of the country for both political and religious reasons. He suppressed a series of revolts by pagan nobles and welded the Magyars into a strong national group. He asked the pope to provide for the Church’s organization in Hungary—and also requested that the pope confer the title of king upon him. He was crowned on Christmas day in 1001.

Stephen established a system of tithes to support churches and pastors and to relieve the poor. Out of every 10 towns one had to build a church and support a priest. He abolished pagan customs with a certain amount of violence, and commanded all to marry, except clergy and religious. He was easily accessible to all, especially the poor.

In 1031, his son Emeric died, and the rest of Stephen’s days were embittered by controversy over his successor. His nephews attempted to kill him. He died in 1038 and was canonized, along with his son, in 1083.

God’s gift of holiness is a Christlike love of God and humanity. Love must sometimes bear a stern countenance for the sake of ultimate good. Christ attacked hypocrites among the Pharisees, but died forgiving them. Paul excommunicated the incestuous man at Corinth “that his spirit may be saved.” Some Christians fought the Crusades with noble zeal, in spite of the unworthy motives of others.

Today, after senseless wars, and with a deeper understanding of the complex nature of human motives, we shrink from any use of violence—physical or “silent.” This wholesome development continues as people debate whether it is possible for a Christian to be an absolute pacifist or whether evil must sometimes be repelled by force.

Saint Stephen of Hungary is the Patron Saint of: